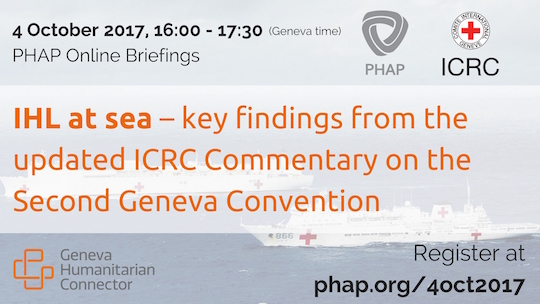 The four Geneva Conventions of 1949 form the cornerstone of contemporary international humanitarian law (IHL). In the 1950s, the International Committee of the Red Cross (ICRC) published a set of commentaries on these Conventions, giving practical guidance on their meaning and implementation. In order to capture the practice gained in implementing and interpreting the Geneva Conventions since then, a multi-year project to update these commentaries is underway: in 2016, the ICRC published its updated Commentary on the First Convention; earlier this year, it published the updated Commentary on the Second Convention.

Among the four Geneva Conventions of 1949, the Second Convention has traditionally been the one which is least well known. This Convention deals with the protection of members of the armed forces when they are wounded, sick or shipwrecked in case of an international armed conflict at sea. In addition, on the basis of common Article 3, the Convention also protects, in case of a non-international armed conflict, both military and civilians which are wounded, sick or shipwrecked at sea as a result of the hostilities or their direct effects.

The Second Convention includes detailed rules regulating hospital ships, coastal rescue craft, as well as the requirement for Parties to the conflict, after each engagement, to take all possible measures to search for and collect the survivors and the dead resulting from such an engagement. Finally, the role of neutral vessels and neutral States with regard to such survivors and the dead is also addressed in the Convention.

Since 1949, the world has been fortunate not to see many conflicts at sea, but we cannot be complacent. The rules of war at sea can help save lives and should not be abandoned. The development of long-range targeting systems and satellites for search and rescue compel a re-examination of the Convention's provisions, drafted in the wake of the Second World War. A changing legal landscape – including the adoption of the 1982 UN Convention on the Law of the Sea along with a number of relevant treaties adopted under the auspices of the International Maritime Organization – also necessitates consideration of how the Second Convention must be applied and interpreted in light of other international legal frameworks.

During this briefing on 4 October, Bruno Demeyere, Legal Advisor at the ICRC, will present the key findings of the updated ICRC Commentary on the Second Geneva Convention, thus allowing interested humanitarian professionals to have a solid understanding of the basic principles conferring protection in case of an armed conflict at sea. After Bruno’s presentation, participants will have the opportunity to ask him questions and engage in a live discussion on this topic.

Wednesday, 4 October 2017 To see when the live session will take place in your time zone, click here.

The event is targeted to legal practitioners as well as humanitarian practitioners needing an advanced understanding of IHL. In order to join the event, please register in advance at phap.org/4oct2017/register

This event is made possible through the Geneva Humanitarian Connector, an initiative of PHAP supported by the Swiss Federal Department of Foreign Affairs.