Rosette, for the Example 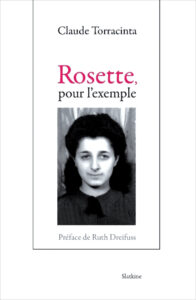 “Threatened with arrest in France, Rosette Wolczak crossed the Swiss border on September 24th 1943. Due to her age and according to the federal legislation, this Jewish teenager had to be welcomed. But on October 16th, she is deported for disciplinary reasons and for an alleged affront to public decency. Arrested by the Germans, she is deported to Auschwitz. She will never return. What happened in Geneva? What did she exactly do that was so serious for her to be sent back to France where Germans were multiplying arrests? What did this fifteen-year-old teenager do that could justify such a cruel measure at a time when military in Geneva were aware that the Jews were arrested and deported to the East? Claude Torracinta wanted to understand the reasons of such an arbitrary and unjustified decision. He carried out an investigation in Switzerland, France and Germany. He found in archives fragments of a life whose tragic fate was played in Geneva in October 1943. Victim of anti-Semitism from some military personnel and of the severe application of federal law to those who wanted to find refuge in Switzerland, Rosette has a right to compensation. Seventy-two years after her disappearance, this book has done her justice.”

R osette for the example, is an 80 page short book. Humble. A story by Claude Torracinta, journalist for the Geneva newspaper Le Temps, who wanted to pay tribute to this fifteen-year-old young girl, portrayed on the book cover. Take her out of oblivion. With sobriety the author wanted to tell the story of the last months of a victim of Swiss haughty, moralist and sometimes anti-Semitic officials, like Daniel Odier who was responsible for the application of the Bern leglisation in Geneva regarding migration programs. We don’t learn anything new from that time with this book. It only gives an individual and realistic dimension using administrative documents and the minutes of proceedings. The coldness of records. In a few words, a book where the focus is the person, the focus is the young woman.

Rosette for the example describes the course of a young Jew whose parents made her pass, in 1943 through Switzerland to flee France and avoid deportation. Rosette wasn’t an exception and Switzerland welcomed several thousands of children following almost the same path. Geneva was the city in Switzerland where the highest number of arrivals was registered.

Rosette crossed the Swiss-French border on September 24th 1943. On arrival she is taken to the Cropettes reception center. Bern’s policy regarding Jews is clear: “French Jews have to be sent away, as they aren’t in greater risk in their country, except for unaccompanied persons of less than 16 years old.” Rosette is fifteen. She can therefore pass and is authorized to stay in Switzerland. But on October 16th, she is deported and escorted to the border. What event could have justified such a decision? The authorities knew perfectly that Rosette would be sent to a camp in Germany and probably die. Archives provide only a partial answer to this. Rosette was caught making love to a young refugee. She is also accused of indecent behaviour towards the soldiers in charge of guarding the reception center, on September 29th, during the celebration of Rosh Hashanah. The sanction is taken: deportation. It is Odier, the official who calls for this decision “to make an example and take measures towards refugees that don’t deserve the welcoming we give them”.

On October 16th, Rosette is escorted to the border. We know that she will be arrested three days later and taken by the Germans to the Pax hotel in Annemasse. What happened during those three days of wandering of this fifteen year-old young woman in the Savoy countryside? We will never know. From there she was taken to the Drancy camp where she left on November 20th to arrive at Auschwitz on November 23rd 1943, where she was gassed the same day.

In November 1944, Rosette’s parents and her brother who were hiding in Isère and had escaped deportation went to Switzerland looking for her. Only in July 1945 they will learn her terrible fate.

Now that Europe in peace is experiencing its biggest humanitarian crisis since the Second World War, this book reminds us that behind events there is always a face, a woman or a man, and that suffering is first of all individual.

We also understand that responsibility with respect to history concerns everyone and not only those who will enter the Encyclopedia as monsters or heroes.

Rosette is the story of those who don’t have one but also the story of chain responsibility. No one is responsible for what could of happened in the reception center in Geneva and yet, the unquestioned judgment led a young girl to death. Today more than ever, this book makes us think about the migrant situation and our responsibility in this crisis. To be read now, as it is relevant to the news of today.

Francisco Rubio – Associated Professor at the Webster University of Geneva